– Mask, terracotta, 28 x 19 x 9.5 cm. Signed Rebull on the right side. 1928 – 1933.
Edited by the art dealer Joan Merli of Barcelona over the period 1928 – 1933. The
edition consisted of six masks.
This mask is one of the four whose whereabouts were unknown in 2012 when a
catalogue raisonné of Rebull’s sculptures was published, the authors having located two
in Spanish collections. Thus it is possible that three other copies of this terracotta
sculpture exist.

Joan Rebull i Torroja was one of the most important Spanish sculptors of the 20th
century. Today in Spain his work is found in the Museo Nacional de Cataluña, in the
Museo de Arte e Historia of Reus, and in the Museo Reina Sofía dedicated to modern
and contemporary art in Madrid.

The son of Catalan farm labourers, Rebull learned to model in clay and to sculpt in
wood while apprenticed to a religious image maker in the nearby town of Reus. At age
eleven he won first prize in a provincial contest with a religious sculpture and at age
sixteen he moved to Barcelona to further his career, studying for a few months at an art
school and working for the famous marble sculptor Bechini who, with his brother, also
operated a foundry for sculptors. Several well-received exhibitions in 1916 and 1917
won Rebull grants and the financial backing of a patron in Barcelona, enabling him to
set up his own studio there.
Rebull was one of the founding members of a group of Catalan artists called Els
Evolucionistes (fruit of a turn-of-the-century spirt of artistic renovation), and he later
joined another famous group called Les Arts i els Artistes. An integral part of the
modern art scene in Catalonia, in 1929 he gave a provocative conference in Reus in
which he played jazz records, smoked a cigar, spoke of geometry and made statements
among which the most memorable and influential was “sculpture is a hole in space.”
Rebull exhibited in Madrid for the first of many times in 1926. In 1925 he worked
together with the furniture designer Antoni Badrinas to produce some pieces that were
shown at that year’s Exposition des Arts Décoratifs et Industriels Modernes in Paris,
thus initiating a lifelong connection with this city. 1 Between 1926 and 1930 he and his
new wife lived just outside Paris and were in close contact with other artists there. They
would live there again for ten years after the Spanish Civil War. While in France Rebull
participated in the Salon des Independents, was good friends with Picasso and
collaborated on design and illustration projects with other French and Spanish artists,
as he did for the magazine Méridiens.
He also received important commissions at home in Catalonia, for instance for
sculptures for the facades of public buildings like Barcelona’s Casal San Jordi (1929).
Rebull’s work was much admired and he won important prizes including Spain’s
National Sculpture Award. Back in Spain in the 1930s, Rebull was involved in politics,
served as an advisor to museums and exhibitions, and served as Commissioner of
Artistic and Historic Patrimony for his province. From 1933 he taught at the Royal 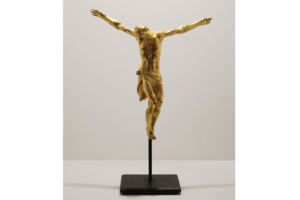